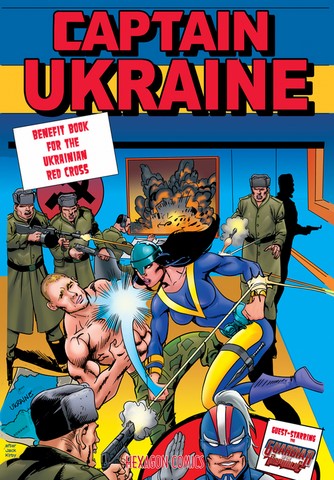 THE FIRES OF VICTORY

This special issue introduces a character who is both new and yet has been part of the Hexagon Universe since 1963: Captain Ukraine!

Nadiya Karine, the modern-day version of this hero, introduced alongside the French Guardian of the Republic in her very first appearance here (in a story by J.-M. Lofficier & Constanzo), is none other than the descendant of Ivan Karine, a Ukrainian Captain from the 17th century, created by Vincenzo Chiomenti, whose exploits were first published in 1963.

The Karine family belongs to the Zaporozhian Cossacks, who were the progenitors of the Ukrainian nation. The first story of this classic series is reprinted here, along with a foreword providing details on this historical, yet still topical, character.

This issue features the Captain Ukraines of the 17th, 19th, 20th and 21st centuries, united in a common effort to defeat injustice and tyranny.

During these tragic hours, Hexagon Comics stands with Ukraine, uniting past and present by releasing this very special issue, the profits of which will be donated to the Ukrainian Red Cross